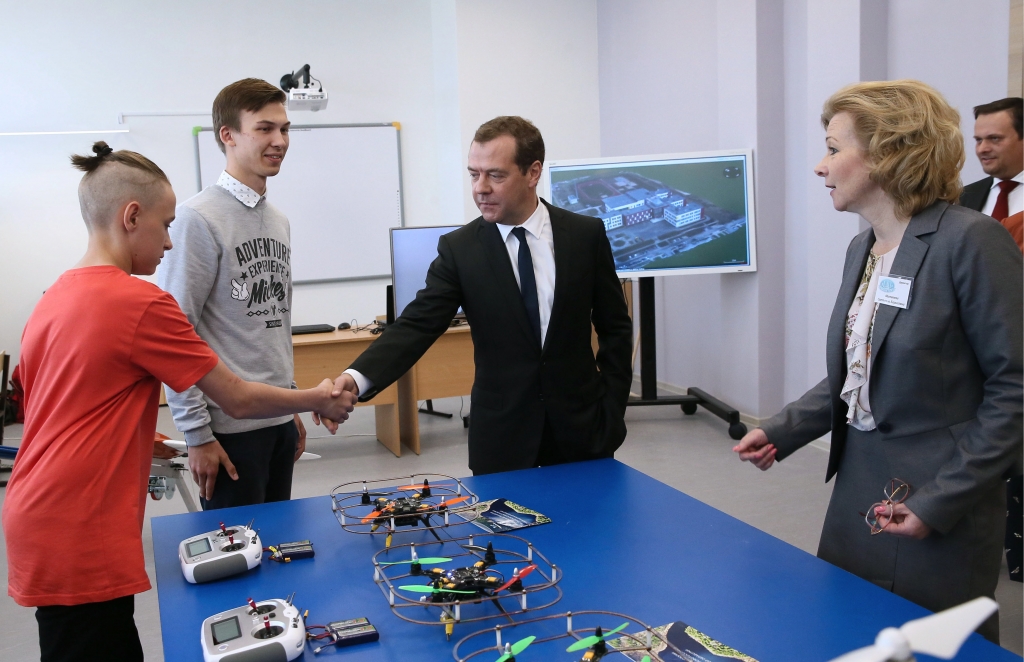 The action plan (“roadmap”) for the development of the children’s club movement within the National Technology Initiative (NTI) has been approved at the meetings of the Presidium of the Council for Economic Modernization and Innovative Development of Russia, which was held by Russian Prime Minister Dmitry Medvedev on July 18 in Veliky Novgorod.

“This year, we have provided 2 billion rubles for the development of the NTI centers network on the basis of universities and scientific institutions. However, we can talk not only about universities. The NTI’s ideology is wider in this sense. It includes popularization of technical creativity among schoolchildren, conducting an NTI Olympiad and technological competitions. The program for development of children’s technoparks – “Kvantoriums” is being implemented. All this is certainly very good and bears some fruit,” Dmitry Medvedev stated.

According to the action plan, by 2025, the NTI children’s club movement will have at least 500 thousand participants – 12–16-year-old schoolchildren and their tutors. Achieving these goals will require 5.7 billion rubles until 2025.

“This money will be spent to involve teenagers in a new system of technological children’s clubs, which allows them to deploy their scientific and engineering talents. Schoolchildren will have the opportunity to learn from competent experts and work on equipment as required for implementation of technological projects, in resource centers – hackerspaces, fablabs, centers of youth innovative creativity, children’s technoparks,” explained Dmitry Zemtsov, co-supervisor of the NTI’ children’s club movement, Deputy Rector for Development at the Far-East Federal University.

According to him, emphasis will be placed on professions of tomorrow, such as data management specialists, neurointerfaces designers, marine infrastructure system engineers, specialists in precision agriculture, operators of automated transport systems.

“For many such specialties in high-tech areas, there are no professional standards and areas of training in high schools yet. But to launch the next wave of the technological revamping of the country, we will need organizers and entrepreneurs in the sphere of high technology, who will be able to create their business in new markets,” Dmitry Medvedev stressed.

The NTI children’s club movement is a community of technological enthusiasts, voluntarily united in “circles”, or clubs, for research and creation of the new. A vivid example of such a club in the history of Russia is the Jet Propulsion Study Group of S.P. Korolev, which gave birth to the Soviet space program. The work of modern clubs implies the absence of prescribed standards of teaching: club’s members experiment with new technologies, new methods of production and labor organization, reviving and strengthening the Russian traditions of scientific and technical creativity and invention. In conditions where traditional educational institutions – schools and universities – are not always able to quickly and flexibly respond to the human resource needs in new markets, clubs, as a network format of non-formal education, may become the main source of highly qualified personnel, who will create new technology and products according the National Technology Initiative philosophy.