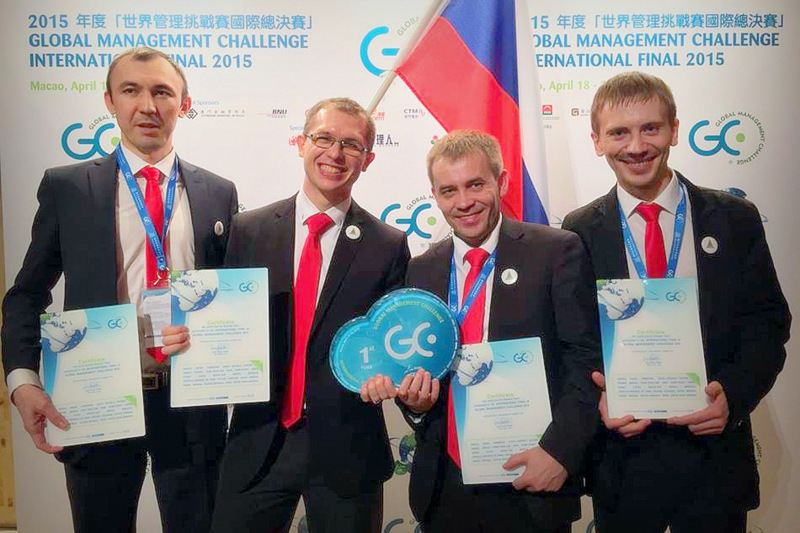 For the third year in a row, the Russian team wins the World Championship in Strategy and Business Management – Global Management Challenge (GMC). Names of the prizewinners of international finals of GMC 2015/2016 season were announced on April 20 in Macao, (China).

In the Russian team, the world champions are Ruslan Sagitov and Viktor Soldatov from the Orenburg Region, Vladislav Zaryanin from the Republic of Bashkortostan and Aleksey Chuvaev from the Novosibirsk Region.

The BRICS representatives occupied all positions at the victory podium. The Chinese team was second and managers from Brazil –third.

Here are the final ratings:

"All the finalists are representatives of developing economies, and the prize-winning trio, talking from the perspective of virtual manufacturing company investment attractiveness, comes from the BRICS countries. I hope that real business of the countries will demonstrate similar success in a short-term perspective", – commented the results of the Championship a GMC champion of Russia, Director of Organizational Development and Strategic Initiatives Institute of RANEPA Vyacheslav Shoptenko.

The victory in Macao is fifth in the history of Russian teams’ participation in the Global Management Challenge. Russian teams won the Championship in 2009 – in Lisbon, in 2012 – in Kiev, in 2014 – in Sochi and in 2015 – in Prague.

The competition was divided into two stages. Of the 25 national teams, only 8 teams ranking first and second in their respective groups made it to the finals. Participants of the first stage were selected by lot. The Russian team's competitors were managers from Latvia, Spain, Romania, Senegal and Greece.

According to the results of the first day of competition, the following teams won through to the octet of the strongest: Slovakia, Czech Republic, Russia and Brazil (first positions in their respective groups); China, Morocco, Latvia and Kenya (second positions in their groups).

During the 5 virtual quarters, the teams managed young companies with the aim of production expansion and finding options to step up their presence on foreign markets. The participants had to react to consumers' volatile behavior promptly by using opportunities provided by economic climate. They could invest in machinery and equipment or outsource part of their operations.

Starting at the 2nd position, our team maintained leading positions throughput all the remaining seasons. To make the winning trio, Russia, Brazil, China, Latvia and Slovakia engaged in fierce contest.

Global Management Challenge is the world's largest strategic management championship. The contest is based on a comprehensive computer business simulator (a game model), which gives an opportunity to gain, in just a month, practical knowledge of company management equivalent to several years of operation in the global competitive environment. Besides, GMC offers a chance to apply theoretic knowledge in practice and master main managerial personal qualities, by combining the best international practices of business education.

The Russian Presidential Academy of National Economy and Public Administration is the organizer of National Strategy and Business Management Championship in Russian as part of the Global Management Challenge, acting with the support of Agency for Strategic Initiatives.

The project was accredited by European Foundation for Management Development (EFMD) as a high-tech learning tool for fast managerial competence building.