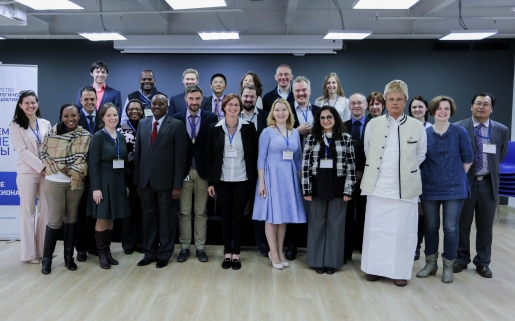 A corresponding letter addressed to the President of BRICS Development Bank Mr. Kundapur Kamath was signed by the participants of Skills Development Working Group during the session of BRICS Business Council held in the World Trade Center on April 6, 2016.

The notion to establish the Fund was elaborated in June last year during a foresight session, where prospects of international collaboration and cooperation of BRICS countries were discussed. Participants of the session were unanimous in admitting deficit of long-term financing and lack of skilled specialists to implement large-scale infrastructure projects in countries of the association. Once established, the Fund may provide support in the form of grants or co-funding of projects to develop various modern forms of professional education.

On the day before the BRICS Business Council session, which was held on April 5, a conference named Evolution of Professional Education in BRICS Countries took place to discuss initiatives of human resourcing for industrial development in countries of the international association within a 1-3-5-year perspective. The BRICS representatives showed their best practices. In India, professional skill training is one of the focus areas of the country's policies. According to demographic forecasts, in 2025 almost one fifth of the world’s working population (18.3%) will be represented by Indians. Presently, 93% of the nation's population work in an uncontrolled environment and gain professional skills through unofficial channels. To solve this problem, in mid-2015 India's Government launched Pradhan Mantri Kaushal Vikas Yojana Program, which suggests provision of material incentives to its participants after successful completion of training, as well as issuance of government certificates that should aid in employment. The program is aimed at standardizing certified personnel and establishing a competence registry. In Brazil, the national on-the-job training service called SENAI operates covering more than 700 schools. The Service has more than 3 thousand training courses in 28 industrial areas to its credit. About 3 million students are involved in this professional skills training system every year. The system is one of the world's largest educational centers. Since its establishment in 1942, SENAI has educated more than 64 million individuals. At the present time, SENAI implements a dual education program similar to the one employed in Germany: educational courses are funded by contributions of industrial enterprises. China is actively developing the model of professional skill contests similar to WorldSkills. Between 2011 and 2014, the country's Government approved the construction of 400 educational bases (National Skills Master Studios) and 320 National High-Skilled Professionals Training Bases. In this period, about 200 championships in more than 300 competences were conducted reaching out to over 10 million vocational training college students. Every year, the country's Government sponsors the training of around 20 million individuals. In SAR, demand for professional and engineering staff grows. In 2015, about 1 million students entered educational facilities. The number of students grows faster than that of educators, teacher-to-student ratio has changed considerably: from 1:20 in 2002 to 1:55 over the last years. Against this background, SAR's Department of Higher Education and Training (DHET), which manages professional worker training expands the number of educational facilities and develops new forms of skills training. Currently, 26 state universities, 50 state technical vocational education and training (TVET) colleges and Further Education and Training (FET) colleges, basic education centers for adults affiliated with schools and about 400 registered private colleges (TVET) operate in SAR. At the Conference, Russia presented its initiative of Staffing of the Russian Industry with New Generation Workers and Engineers by year 2020. As part of the initiative, assessment of is under way in 13 regions of the country, 74 regions are incorporated in the WorldSkills activities dedicated to professional skill championships. For the first time Russia qualified to host the 45th International WorldSkills Competition in 2019, in Kazan.

The Head of Department for Support of Recruiting Support of Industrial Development, Young Professionals Section, Yekaterina Loshkareva remarked: "We are glad to report a productive year, during which we have achieved a common vision and demonstrated graphically the efficiency of such projects as WorldSkills Hi-Tech, Junior Skills, Atlas of New Professions and Rapid Foresight technique.

On April 7, ASI, supported by the Department of Education of Moscow and Worldskills Russia offered to conference participants a tour of Polytechnic College No. 8 named after double hero of the Soviet Union I. F. Pavlov. The hosts showed their professional experience and best practices of worker training using a proactive education system with competence building programs in high-tech sectors. The classrooms and workshops of the College are furnished with modern equipment, there is an operational robot-assisted training complex and educators' professional development is effected with due account for best international practices.

Skills Development Work Group is one of the seven work groups of BRICS Business Council. Its area of responsibility is bridging the gap between the needs of rapidly growing economies of BRICS and quality of professional education of the association's countries, as well as pooling the best practices in the area of personnel training. The key objective of the Work Group is generating a common vision of future competence building and development of joint projects.

It should be recalled that since February 2016, chairmanship in the inter-state association BRICS has passed from Russia to India. During the presidency of Russia, joint activities were implemented to build professional competence in BRICS countries:

A foresight session dedicated to staff training in BRICS countries was held in July 2015 in Moscow.

Content for Atlas of New Professions of BRICS countries is being generated.

A Junior Skills session for BRICS representatives is planned to be held at the Ocean Summer Camp (July 15 – August 3, 2016).