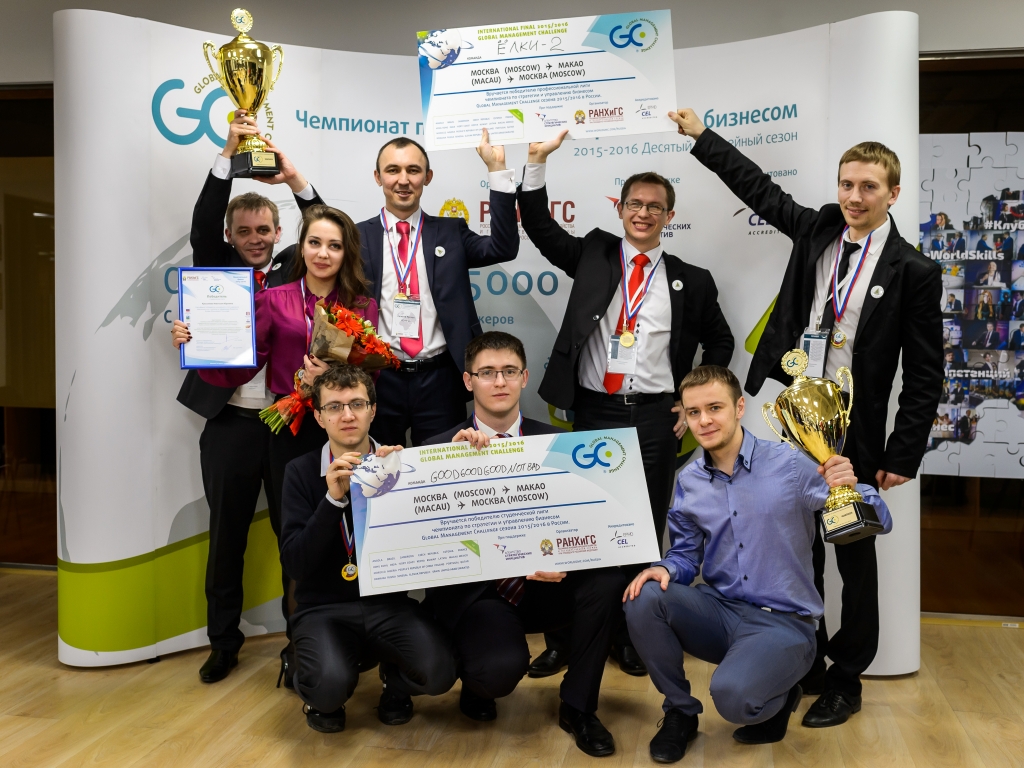 Russia has chosen its representatives for the International Final of the “Global Management Challenge” (GMC), the Strategy and Management Competition, which will be held on April 17-22, 2016 in Macau (China). The representatives from the Novosibirsk and Orenburg Regions as well as the Republic of Bashkortostan will compete for the title of the best planet managers on behalf of our country.

The winner of the Russian GMC championship, which was ended at the site of the Agency for Strategic Initiatives “Tochka Kipenia”(Boiling Point) on March 30, 2016, was the team “Yelki-2”: Ruslan Sagitov (the Orenburg Region), Vladislav Zaryanin (the Republic of Bashkortostan), Alexey Chuvaev (the Novosibirsk Region) and Victor Soldatov (the Orenburg Region).

The representatives of “Yelki-2” have already become champions of regional cups, as well as they took part in the national GMC Final and played for teams representing their regions. More than 5,300 people took part in the Russian GMC championship in season 2015/2016. Within the framework of the Championship there were held 5 Regional Cups – in the regions of Samara, Leningrad, Kirovsk and Omsk as well as the Khanty-Mansijsk Autonomous District – Yugra.

The Final of the Professional League got together some teams from the regions of Leningrad, Omsk, Samara and Kirov, the Khanty-Mansijsk Autonomous District - Yugra, the Nizhny Novgorod region, the Republic of Karelia and the national team of the Republic of Bashkortostan, the Orenburg and Novosibirsk regions.

The team of the Ural Federal University named after the first President of Russia B. N. Yeltsin became the best students team, which previously held second place at the National Finals in 2014 and 2015. Members of this team will participate in the World Final in Macau as observers.

The Global Management Challenge is the largest Strategy and Management Competition in the world. The championship is based on a complex software business-simulator (game model) that gives an opportunity to run a company and to obtain management experience for less than a month, equal to several years of work in the context of global competition. Besides GMC provides an opportunity to apply theoretical knowledge in practice as well as to practice basic management and personal skills by integrating the world’s leading experience into business education.

The National Championship on Strategy and Business Management in Russia was organized by the Russian Academy of National Economy and State Service under the President of the Russian Federation with the assistance of the Agency for Strategic Initiatives within the framework of the Global Management Challenge.

The project is accredited by the European Foundation for Management Development (EFMD) as a high-tech educational tool for rapid development of management competencies.