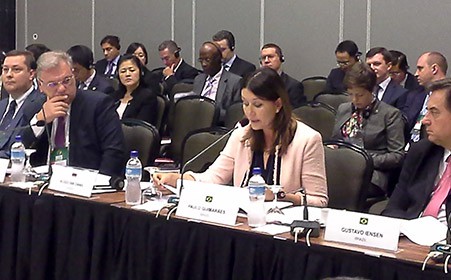 February 10, ASI delegation headed by the corporate director of the agency Svetlana Chupsheva took part in the meeting of the BRICS Business Council held in Brasilia, Brazil.

The Agency for strategic initiatives has proposed establishing a new working group on deregulation and investment support among the member countries, and join forces in the development of advanced production technologies and staff training for high-tech industries.

The first initiative has met with unanimous approval of the representatives of the Business Council. Leaders of the national delegations have proposed a unified approach to standards and regulations for companies from member countries, and consolidated efforts to reduce administrative barriers, particularly in the field of customs and tax administration, visa regime and phyto-sanitary standards.

The decision on the exact date of the working group kick-off meeting was not adopted, but the members of the council agreed to hold it during the presidency of Russia, which begins in April 2015.

The second set of proposals announced by Svetlana Chupsheva was dedicated to the development of technological base, staff training, and educational programs.

In particular, the set included the development of the "Atlas of new professions", holding an educational and technological foresights for the BRICS countries, as well as the organization of the BRICS WorldSkills championship.

According to the chairman of the Russian part of the BRICS Business Council, President of the Chamber of Commerce and Industry of the Russian Federation (RF CCI) Sergey Katyrin, the decision to establish a new working group will be included in the annual report of the Business Council of BRICS. Mr. Katyrin thanked his colleagues for supporting the Russian proposals and spoke about the experience of Russia in reducing administrative barriers. In particular, he noted the activities of the working groups of ASI for the creation and implementation of the "road maps" of the National Business Initiative.